Spring is in the forecast and that is making me think about things you can do outside. And as these new sports titles came across my desk, I knew I had to share them with you! 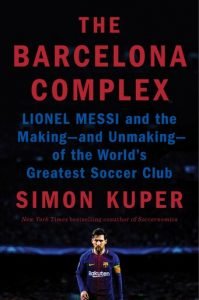 “FC Barcelona is not just a giant soccer club; it is simply one of the most influential organizations on the planet. At last count, it had approximately 239 million social media followers, more than any other sports club – and by one earlier measure, more than all thirty-two NFL teams combined. It has more in common with multinational megacompanies like Netflix or small nation-states than it does with most soccer teams. No wonder its motto is ‘More than a club.’ But it was not always so. In the past three decades, Barcelona has gone from a regional team to a global powerhouse, becoming a model of sustained excellence and beautiful soccer, and a consistent winner of championships. Simon Kuper unravels exactly how this transformation took place, paying special attention to the biggest stars of the club’s past – Johan Cruyff, who created the modern Barca – and present – Lionel Messi, who is arguably the greatest soccer player of all time. Messi joined Barca at age thirteen and, more than anyone, has been the engine and standard-bearer of Barcelona’s glory. But his era is coming to an end – and with it , a once-in-a-lifetime golden run. This book charts Barca’s rise and fall.

Like many world-beating organizations, FC Barcelona closely guards its secrets, granting few outsiders access to the Camp Nou, its legendary home stadium. But after decades of writing about the sport and the club, Kuper was given rare and unparalleled access to the inner sanctum and the people behind the scenes who strive daily to keep Barcelona at the top. Erudite, personal, and capturing all the latest upheavals, Kuper’s portrait of this incredible institution goes beyond soccer to understand FC Barcelona as a unique social, cultural, and political phenomenon. 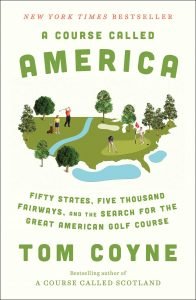 “After playing hundreds of courses overseas in the birthplace of golf, Tom Coyne returns to his own birthplace and delivers a rollicking love letter to golf in the United States. In the span of one unforgettable year, Coyne crisscrosses the country in search of its greatest golf experience, playing every course to ever host a US Open, along with more than two hundred hidden gems and heavyweights, visiting all fifty states to find a better understanding of his home country and countryman.

Coyne’s journey begins where the US Open and US Amateur got their start, historic Newport Country Club in Rhode Island. As he travels from the oldest and most elite of links to the newest and most democratic, Coyne finagles his way onto coveted first tees (Shinnecock, Oakmont, Chicago GC) between rounds at the off-the-map revelations, like ranch golf in Eastern Oregon and homemade golf in the Navajo Nation. He marvels at the golf miracle hidden in the sand hills of Nebraska, and plays an unforgettable midnight game under bright sunshine on the summer solstice in Fairbanks, Alaska.

More than just a tour of the best golf the United States has to offer, Coyne’s quest connects him with hundreds of American golfers, each from a different background but all with one thing in common: pride in welcoming Coyne to their course. Trading stories and swing tips with caddies, pros, and golf buddies for the day, Coyne adopts the wisdom of one of his hosts in Minnesota: the best courses are the ones you play with the best people.

But, in the end, only one stop on Coyne’s journey can be ranked the Great American Golf Course. Throughout his travels, he invites golfers to debate and help shape his criteria for judging the quintessential American course. Should it be charmingly traditional or daringly experimental? An architectural showpiece or a natural wonder? Countless conversations and gut instinct lead him to seek out a course that feels bold and idealistic, welcoming yet imperfect, with a little revolutionary spirit and a damn good hot dog at the turn. He discovers his long-awaited answer in the most unlikely of places.

Packed with fascinating tales from American golf history, comic road misadventures, illuminating insights into course design, and many a memorable round with local golfers and celebrity guests alike, A Course Called America is an epic narrative travelogue brimming with heart and soul.” 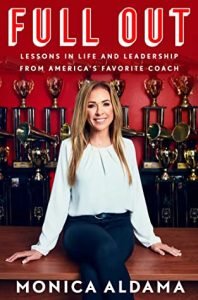 “In Full Out, Coach Monica Aldama – ‘the Bill Belichick of cheerleading’ – shares what she learned as she built one of the most successful and beloved cheerleading programs in the country. Her uncompromising brand of discipline and consistency goes far beyond the mat – showing how her principles of excellence apply to personal goals, the corporate world, parenting, and all aspects of her life. Her hard-won lessons and actionable advice include:

There’s a lot to talk about these days about shortcuts and life hacks, but what really counts is commitment and integrity, helping your friends, and improving your teammates. Coach Monica divulges deeply personal stories of triumph and tragedy, including divorce from and remarriage to her husband, her challenges as a young mother working full-time, and her strenuous weeks on Dancing with the Stars. She shares surprising behind-the-scenes moments from the Cheer docuseries and insights gleaned from more than two decades of pushing students to succeed.

A true force and inspiration who has captured hearts around the world, Coach Monica will show you how to take command of your talent, make the most of your potential, and find your drive to win.” 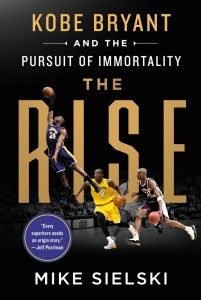 “Kobe Bryant’s death in January 2020 did more than rattle the worlds of sports and celebrity. The tragedy of that helicopter crash, which also took the life of his daughter Gianna, unveiled the full breadth and depth of his influence on our culture, and by tracing and telling the oft-forgotten and lesser-known story of his early life, The Rise promises to provide insight into Kobe that no other analysis has.

In The Rise, readers will travel from the neighborhood streets of southwest Philadelphia – where Kobe’s father, Joe, became a local basketball standout – to Italy, where the Bryant family was isolated and Kobe spent his formative years, to the leafy suburbs of lower Merion, where Kobe’s legend was born. The story will trace his career and life at Lower Merion – he led the Aces to the 1995-96 Pennsylvania state championship, a dramatic underdog run for a team with just one star player – and the run-up to the 1996 NBA draft, where Kobe’s dream of playing pro basketball culminated in his acquisition by the Los Angeles Lekers.

In researching and writing The Rise, Mike Sielski has a terrific advantage over other writers who have attempted to chronicle Kobe’s life: access to a series of never-before-released interviews with him during his senior season and early days in the NBA. For a quarter century, these tapes and transcripts preserved Kobe’s thoughts, dreams, and goals from his teenage years, and they contain insights into and stories about him that have never been released before.

This is more than a basketball book. This is an exploration of the identity and making of an icon and the effect his development had on those around him – the essence of the man before he truly became a man. 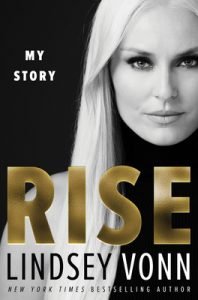 “A fixture in the American sports landscape for almost twenty years, Lindsey Vonn is a legend. With a career that spanned a transformation in how America recognizes and celebrates female athletes, Vonn – who retired in 2019 as the most decorated female skier of all time – was in the vanguard of that change, helping blaze a trail for other world-class female athletes and reimagining what it meant to pursue speed at all costs.

In Rise, Vonn shares her incredible journey for the first time, going behind the scenes of a badass life built around resilience and risk-taking. One of the most  aggressive skiers ever, Vonn offers a fascinating glimpse into the relentless pursuit of her limits – a pursuit so focused on one-upping herself that she pushed her body past its breaking point as she achieved greatness. While this iconic grit and perseverance helped her battle a catalog of injuries, these injuries came with a cost – physical, of course, but also mental. Vonn opens up about her decades-long depression and struggles with self-confidence, discussing candidly how her mental health challenges influenced her career without defining her.

Through it all, she dissects the moments that sidelined her and how, each time, she clawed her way back using an iconoclastic approach rooted in hard work – pushing boundaries, challenging expectations, and speaking her mind, even when it got her into trouble. At once empowering and raw, Rise is an inspirational look at Vonn’s hard-fought success as well as an honest appraisal of the sacrifices she made along the way – an emotional journey of winning that reveals how every victory comes with a price.”

I hope you find inspiration in these stories (and enjoy the upcoming warm temperatures!).
-Ashley