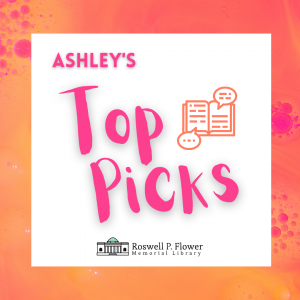 As I’ve scanned the new nonfiction books passing by my desk over the last few months, I’ve noticed a theme – there have been quite a few about popular musicians! I wish I had the time to dive in and read them all myself, but my responsibilities have made that choice. Hopefully you can pick one up for me! 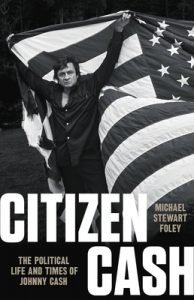 “Johnny Cash was an American icon, known for his level, bass-baritone voice and somber demeanor, and for huge hits like “Ring of Fire” and “I Walk the Line.” But he was also the most prominent political artist in the United States, even if he wasn’t recognized for it in his own lifetime, or since his death in 2003.

Then and now, people have misread Cash’s politics, usually accepting the idea of him as a “walking contradiction.” Cash didn’t fit into easy political categories—liberal or conservative, Republican or Democrat, hawk or dove. Like most people, Cash’s politics were remarkably consistent in that they were based not on ideology or scripts but on empathy—emotion, instinct, and identification.

Drawing on untapped archives and new research on social movements and grassroots activism, Citizen Cash offers a major reassessment of a legendary figure.” 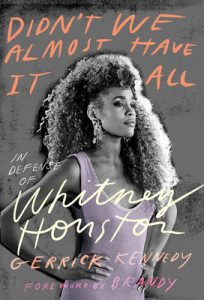 “On February 11, 2012, Whitney Houston was found submerged in the bathtub of her suite at the Beverly Hilton Hotel. In the decade since, the world has mourned her death amid new revelations about her relationship to her Blackness, her sexuality, and her addictions. Didn’t We Almost Have It All is author Gerrick Kennedy’s exploration of the duality of Whitney’s life as both a woman in the spotlight and someone who often had to hide who she was. This is the story of Whitney’s life, her whole life, told with both grace and honesty.

Long before that fateful day in 2012, Whitney split the world wide open with her voice. Hers was a once-in-a-generation talent forged in Newark, NJ, and blessed with the grace of the church and the wisdom of a long lineage of famous gospel singers. She redefined “The Star-Spangled Banner.” She became a box-office powerhouse, a queen of the pop charts, and an international superstar. But all the while, she was forced to rein in who she was amid constant accusations that her music wasn’t Black enough, original enough, honest enough.

Kennedy deftly peels back the layers of Whitney’s complex story to get to the truth at the core of what drove her, what inspired her, and what haunted her. He pulls the narrative apart into the key elements that informed her life—growing up in the famed Drinkard family; the two romantic relationships that shaped the entirety of her adult life, with Robyn Crawford and Bobby Brown; her fraught relationship to her own Blackness and the ways in which she was judged by the Black community; her drug and alcohol addiction; and, finally, the shame that she carried in her heart, which informed every facet of her life. Drawing on hundreds of sources, Kennedy takes readers back to a world in which someone like Whitney simply could not be, and explains in excruciating detail the ways in which her fame did not and could not protect her.

In the time since her passing, the world and the way we view celebrity have changed dramatically. A sweeping look at Whitney’s life, Didn’t We Almost Have It All contextualizes her struggles against the backdrop of tabloid culture, audience consumption, mental health stigmas, and racial divisions in America. It explores exactly how and why we lost a beloved icon far too soon.” 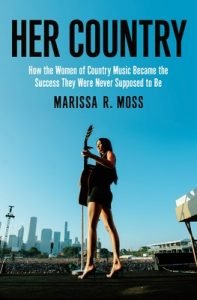 “It was only two decades ago, but, for the women of country music, 1999 seems like an entirely different universe. With Shania Twain, country’s biggest award winner and star, and The Chicks topping every chart, country music was a woman’s world: specifically, country radio and Nashville’s Music Row.

Cut to 2021, when women are only played on country radio 16% of the time, on a good day, and when only men have won Entertainer of the Year at the CMA Awards for a decade. To a world where artists like Kacey Musgraves sell out arenas but barely score a single second of airplay. But also to a world where these women are infinitely bigger live draws than most male counterparts, having massive pop crossover hits like Maren Morris’s “The Middle,” pushing the industry to confront its deeply embedded racial biases with Mickey Guyton’s “Black Like Me,” winning heaps of Grammy nominations, banding up in supergroups like The Highwomen and taking complete control of their own careers, on their own terms. When the rules stopped working for the women of country music, they threw them out and made their own: and changed the genre forever, and for better.

Her Country is veteran Nashville journalist Marissa R. Moss’s story of how in the past two decades, country’s women fought back against systems designed to keep them down, armed with their art and never willing to just shut up and sing: how women like Kacey, Mickey, Maren, The Chicks, Miranda Lambert, Rissi Palmer, Brandy Clark, LeAnn Rimes, Brandi Carlile, Margo Price and many more have reinvented the rules to find their place in an industry stacked against them, how they’ve ruled the century when it comes to artistic output―and about how women can and do belong in the mainstream of country music, even if their voices aren’t being heard as loudly.” 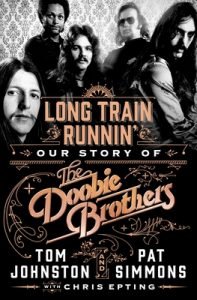 “Only a very few rock bands have had the longevity, success, and drama of The Doobie Brothers. Born out of late 1960s NorCal, and led by Pat Simmons and Tom Johnston, they stood alongside their contemporaries The Grateful Dead, The Allman Brothers, and many others as an iconic American rock band. The train was rolling along, hits were flowing like wine, and arenas were packed with fans who wanted to see them live…then Tom Johnston, the band’s front man and lead guitarist, became ill and had to leave.

The Doobies’ train came to a screeching halt. All of a sudden the band started contemplating the end of the road only seven years into their career, just as things were taking off. But Pat Simmons made sure they were far from the end and began the process of keeping the band together through most of the next decade.

A soul-steeped backup singer for Steely Dan named Michael McDonald took a shot at singing some of the Doobies’ songs on tour, and all of a sudden a new chapter in the Doobie Brothers’ story began. The band expanded their sound and had even more hits with their new front addition. Tom recovered from his health issues, but the band had moved on. When it came time for a reunion concert in the ’80s, Tom got the call and was back in the mix. Led once again by Pat and Tom, The Doobie Brothers have been touring ever since and maintain a massive fan base the world over.

Never before have Pat and Tom shared their story, in their own words. In Long Train Runnin’ they’ll change that.” 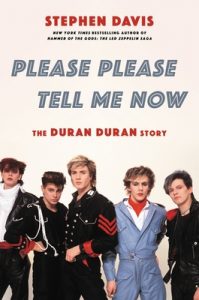 “In Please Please Tell Me Now, bestselling rock biographer Stephen Davis tells the story of Duran Duran, the quintessential band of the 1980s. Their pretty boy looks made them the stars of fledgling MTV, but it was their brilliant musicianship that led to a string of number one hits. By the end of the decade, they had sold 60 million albums; today, they’ve sold over 100 million albums—and counting.

Davis traces their roots to the austere 1970s British malaise that spawned both the Sex Pistols and Duran Duran—two seemingly opposite music extremes. Handsome, British, and young, it was Duran Duran that headlined Live Aid, not Bob Dylan or Led Zeppelin. The band moved in the most glamorous circles: Nick Rhodes became close with Andy Warhol, Simon LeBon with Princess Diana, and John Taylor dated quintessential British bad girl Amanda De Cadanet. With timeless hits like “Hungry Like the Wolf,” “Girls on Film,” “Rio,” “Save a Prayer,” and the bestselling James Bond theme in the series’ history, “A View to Kill,” Duran Duran has cemented its legacy in the pop pantheon—and with a new album and a worldwide tour on the way, they show no signs of slowing down anytime soon.  Featuring exclusive interviews with the band and never-before-published photos from personal archives, Please Please Tell Me Now offers a definitive account of one of the last untold sagas in rock and roll history—a treat for diehard fans, new admirers, and music lovers of any age.”

This list is just a quick start – there is so much more to learn about our greatest musicians! Consult a librarian at 315-785-7714 for tips or help on searching for other materials.