Artwork on the North Mezzanine 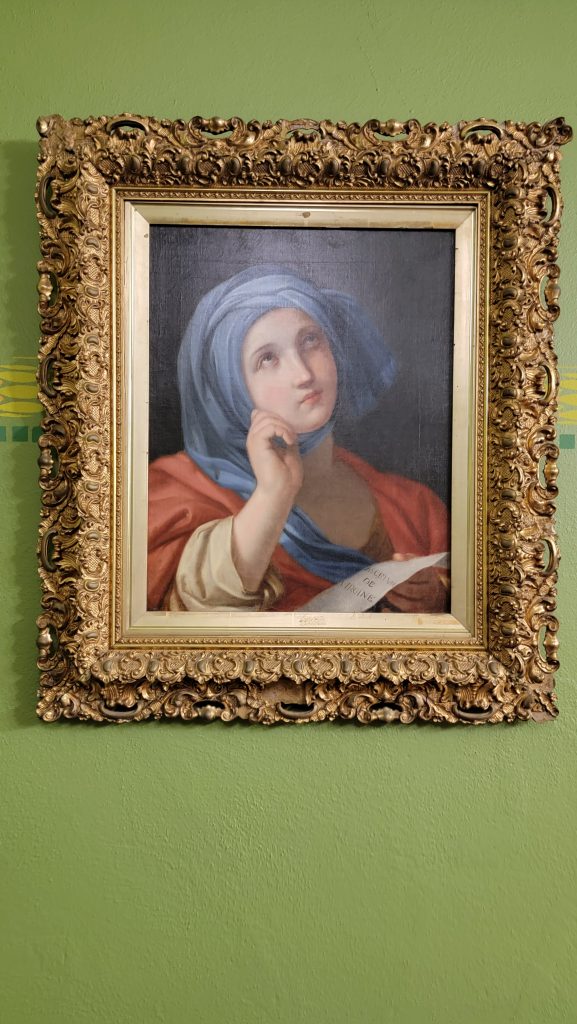 The Holland Dame painting by Robert David Gauley was purchased as part of an experiment by the Municipal Improvement League. The experiment started in 1906 when Charles Naegele, Frederick Flower, and other important citizens “worked to create an art museum in which citizens actually selected the picture of pictures they wanted from the exhibition.”  Citizens were charged 10 cents to view the exhibition and were each given a ticket to vote for the best picture. “The painting receiving the largest number of votes was purchased at the end of the exhibition. Should the receipts be more than the price of the picture selected, the remainder was to be used to purchase an additional painting.”

The Holland Dame by Gauley and The Pines by Charles Eaton were both purchased as a part of the exhibition. Both were also awarded medals at the Louisiana Purchase Exposition. 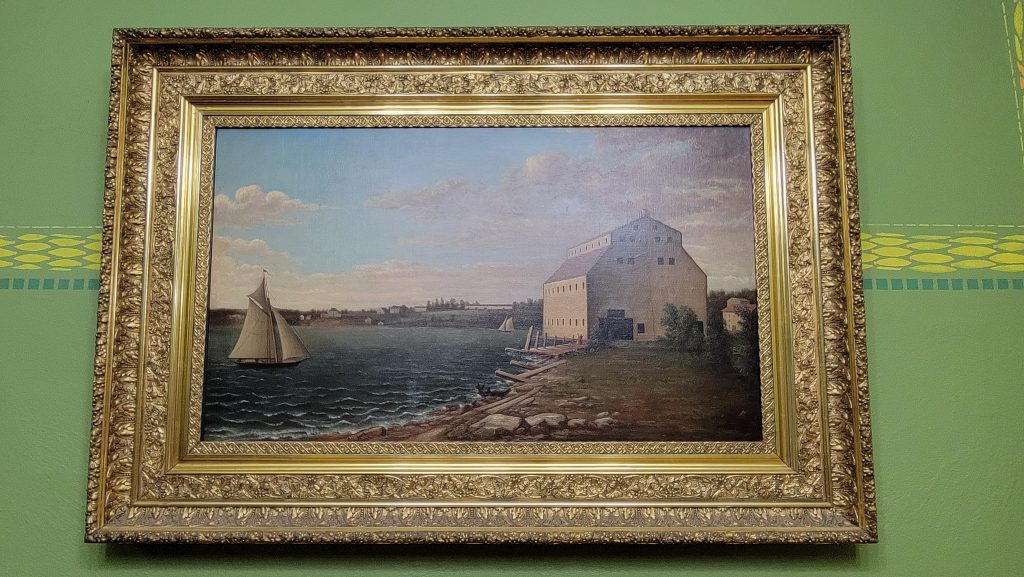 Mrs. Edward N. Smith presented this painting by Lemual L. Lowell (dated 1869) to the library in 1956. The painting originally hung in Governor Flower’s mansion. Smith received the painting from Emma Flower Taylor when the mansion was dismantled.

Several naval vessels were built at Sackets Harbor for the US government by Henry Eckford in 1813-1814. Late in January, 1815, he contracted with the government to build and launch there within sixty days two frigates to carry 120 guns each. Work upon one of these, the New Orleans, had progressed three weeks and her hull was nearly completed, when orders came from Washington to stop work on her. News had arrived that peace between the United States and England had been signed at Ghent Belgium on December 24th.

The painting is of the Old Ship House which was a barn-like building at the end of Navy Point, Sackets Harbor, which was erected to house and preserve the War of 1812 battleship New Orleans. The ship house fell by decay in 1880, leaving the great old ship exposed.

An almost exact unsigned copy is owned by a person in Sackets Harbor and was restored by Westlake Conservators.

Lemual L. Lowell was born in Herkimer County, NY and maintained a studio in the Paddock Arcade from 1865-1914 when he died. 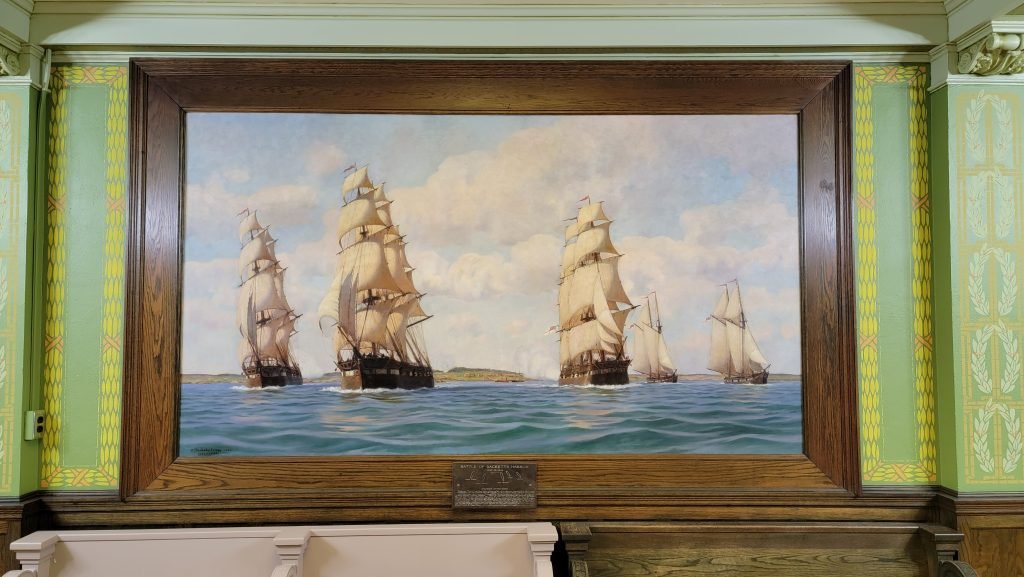 The Battle of Sackets Harbor was created by Hiram Peabody Flagg in 1904. Flagg was born in 1859 in Somerville, MA. He was in New York City in 1904 when he was commissioned to execute two historical murals for the library.

This specific mural is mounted in a sawn oak frame and is set with a brass plaque that identifies the various sailing ships and describes the battle.

The plaque below the painting is inscribed:

Lieutenant Woolsey, who had taken charge of the shore defenses caused a 32-pound cannon, which had been discarded from his brig, the Oneida, as it was too heavy caliber, to be mounted on a pivoted carriage upon a mound commanding the harbor, placing it under the direction of Sailing Master William Vaughn. When the British demanded the surrender of the port, they were refused and a shot from this gun, the first one fired in the war, began the battle.

The Americans lacked 32-pound shot for their cannon but used 24-pound balls wrapped in pieces of carpet. For two hours the British ships stood on and off the harbor, keeping up a desultory fire, until a well directed shot from the 32-pounder raked the flag ship, the Royal George, fore and aft, killing eight men and wounding many others. This brought the engagement to an end; and the British Commander made all sail for Kingston abandoning the attempt to capture the port, which the Royal George alone, well manned and appointed might easily have accomplished. 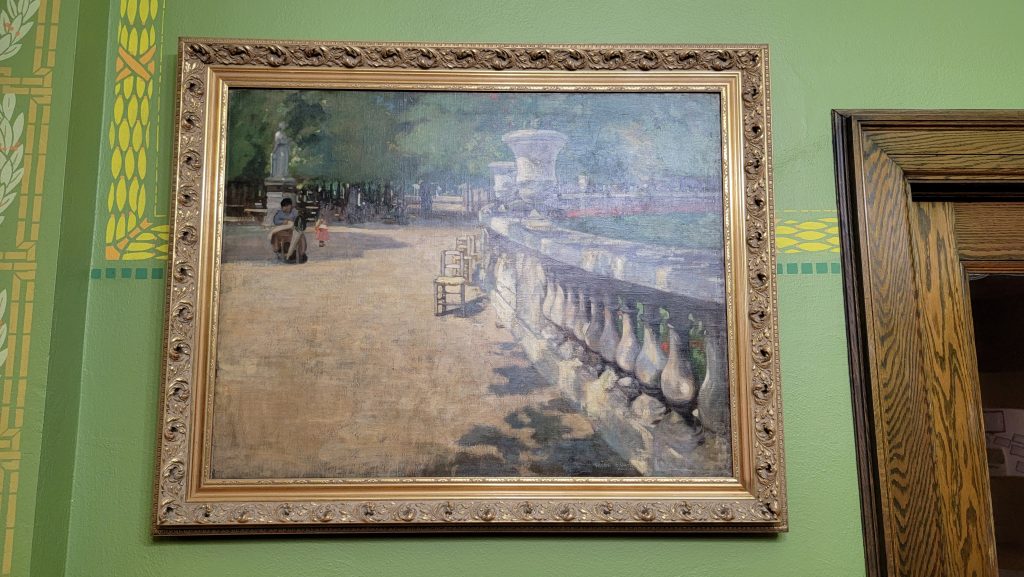 This painting was created by Alson Skinner Clark, who was born in Chicago in 1876 and died in 1949 in California. This painting, depicting a woman and child to the left with several wooden chairs near the balustrade and urns to the right, is dated ‘o4.

Alson Skinner Clark is known as a member of the California Impressionists group of the period between the First and Second World Wars. However, his talent and development as an artist started years before that, and his ties to the Watertown and the Thousand Islands allow us to claim him as one of our own.

Clark was born in Chicago to a wealthy family. His father traded in commodities at the Chicago Board of Trade and was very successful. Clark showed artistic talent at a young age and was training at the School of the Art Institute of Chicago at the age of 11. The family took a 2-year world tour in 1889-90, which exposed young Alson to travel, art and cosmopolitan culture. In 1896, at age 20, Clark moved to New York to study at the Art Students League, and later the Chase School of Art, under artist William Merritt Chase. In 1898, Clark went to study in Paris under James McNeill Whistler until 1901.

The Clark family had ties to Northern New York. Alson Skinner Clark’s mother, Sarah Skinner Clark, was from Brownville. Her relationship to the area was obviously close as Alson considered Amelia Baker of Watertown his “best friend”. In 1882, the Clark family purchased Comfort Island off what is now Keewaydin State Park, near Alexandria Bay, where they built a Victorian summer home. During the late 19th and early 20th century, the family spent summers regularly there and continued to own the island until less than 10 years ago. Alson Skinner Cark and his artist friends, including Amelia Baker, painted murals on the walls inside the Victorian summer home at Comfort Island in the late 1890s. With less frequent use after 1930, the house began to decline and the murals painted on plaster walls made rehabilitation of the interior of the home difficult.

When Alson Clark returned from Paris in 1901, he summered at Comfort Island and then set up an art studio in the barn belonging to Amelia Baker’s parents in Watertown. (This was probably at 126 Paddock Street.) In setting up his first studio, he embarked on his professional art career here in Watertown. Clark’s first art show was in Watertown, and his work began to sell. From Watertown, his show travelled to Chicago to considerable acclaim.  In September 1902, Clark married a Watertown woman who had modeled for him, Atta Medora McMullin. The couple promptly left for Paris, where they lived, and he painted, for many years.  The couple travelled extensively in Europe, Panama, and Canada, returning regularly to Comfort Island and Watertown. In 1910, the Clarks were living in Giverny where he became forever associated with the Impressionist movement, influenced by painters residing there, including Claude Monet.

Having sustained injury to his hearing during Navy service in WWI, Clark was advised to move to a warm climate so they moved to Pasadena, California. The artist became associated with the California Impressionist group. His early training in Chicago, work with acclaimed artists in New York City and Paris, and the many years living in Europe, influenced his artistic talent during a seminal time in the history of Western modern art.

The Municipal Improvement League, an organization started in Watertown in 1906 to build and keep the city beautiful, acquired this painting, variously titled “In the Luxembourg Gardens”, “Park in Paris,” or “Gardens in Sunlight.” The League held art competitions where for ten cents the public voted for their favorite artwork. This painting received the most votes in the summer of 1908 at a show held at S. L. George Gallery on Court Street and was acquired by the Municipal Improvement League for the Art Gallery in the Roswell P. Flower Memorial Library.